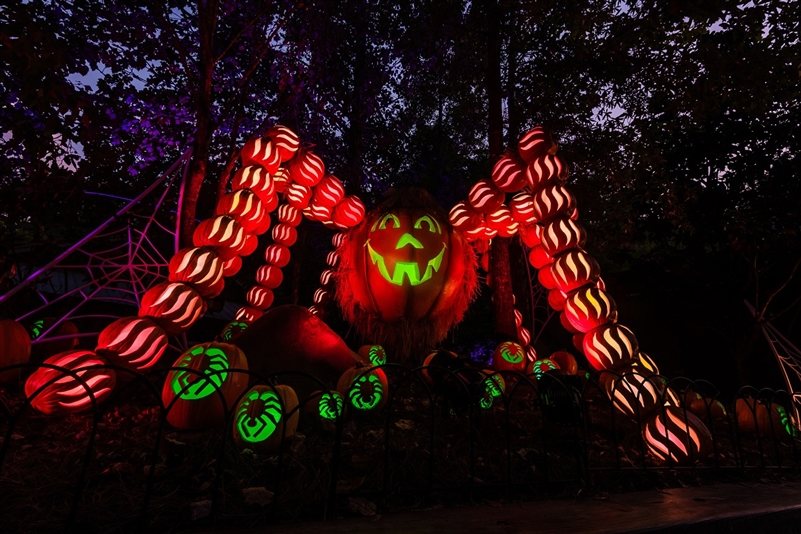 Dollywood's Great Pumpkin LumiNights doubles in size this season with several new displays alongside a number of returning favorites, like the popular pumpkin spider from last season.
Photo by: Business Wire

Dollywood opens every day Sept. 28 - Nov. 3 from 10 a.m. – 9 p.m. giving guests more time to enjoy the festive fall fun of harvest time in the Smokies. After the glowing reviews of last year’s Great Pumpkin LumiNights, Dollywood officials knew the event was ripe for growth. Last year’s popular pumpkin displays—like the pumpkin spider and the pumpkin dance party—are joined in 2018 by a number of elaborate, new additions, including a couple of Dolly Parton-inspired displays.

The Plaza at Wilderness Pass serves as a centerpiece for the event with an area for character interaction, additional displays—and the focal point—a 40 ft. tall expertly-carved pumpkin tree. With the addition of Great Pumpkin LumiNights to the Harvest Festival in 2017, a number of families created new traditions and memories they’ll share forever, something Parton expected to happen once she first saw the renderings for the initial event.

“We knew families were going to love all those glowing pumpkins last year,” she explained, “but with the way they responded, we found they were looking for a different and fun, family-friendly way to spend time together during this special time of year; Great Pumpkin LumiNights was certainly it. That’s why we’re givin’ them even more to love during this year’s festival. During the day, they can see all those beautiful colors God has painted across the mountains, and at night, they can experience the fun of a Smoky Mountain harvest.”

Families will bask in the glow of thousands of intricately-carved pumpkins as they wander through displays throughout Dollywood’s Timber Canyon, Wilderness Pass and upper Craftsman’s Valley areas. Beyond the impressive displays, guests can find a number of exciting activities to create thrilling memories together. With so many carved pumpkins needed to create Great Pumpkin LumiNights, Dollywood has “pumpkin artists” who will host demonstrations to help guests learn how to produce the perfect pumpkin masterpiece.

“You really can say my career started back in those days when we’d visit all those small country churches just singin’ about God,” Parton said. “That music is close to my heart, so I’m truly proud we’re able to offer our guests so many opportunities to hear this great music during the Harvest Festival at Dollywood.”

About The Dollywood Company
A highly-awarded and widely-recognized leader in the amusement industry, The Dollywood Company consists of the 150-acre Dollywood theme park; the 35-acre Dollywood’s Splash Country; Dollywood’s DreamMore Resort and Spa; and Dollywood’s Smoky Mountain Cabins. As unique as its namesake and owner Dolly Parton, Dollywood is the 2010 Applause Award winner, the theme park industry’s highest accolade; winner of more than 35 Golden Ticket Awards; and recipient of 26 Brass Ring Awards for Live Entertainment (more than any other theme park in the world). The park is located near Great Smoky Mountains National Park, which celebrated record attendance in 2017. Dollywood was named a top three US theme park by USA Today in 2014 and 2017. Dollywood is open nine months a year (late March through early January) and offers rides and attractions, shows, and crafters authentic to the East Tennessee region. Dollywood’s Splash Country, recognized by the Travel Channel and TripAdvisor as one of the country’s most beautiful water parks and named 2009’s Must-See Waterpark by the International Association of Amusement Parks & Attractions, operates from mid-May to Labor Day. Dollywood’s DreamMore Resort and Spa, which received the 2017 Certificate of Excellence from TripAdvisor, provides guests spectacular mountain views and family-friendly amenities next door to Dollywood theme park and Dollywood’s Splash Country. Dollywood’s Smoky Mountain Cabins offers luxurious cabin accommodations overlooking Dollywood. For more information, call 1-800-DOLLYWOOD or visit dollywood.com. Operating days and hours vary.