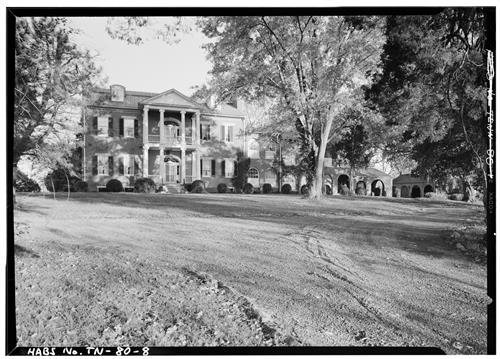 Fairvue, also known as the historic Isaac Franklin Plantation, was built in 1832. Isaac Franklin was a successful slave trader who sold about 1,200 enslaved people into the Southwest region. He earned almost $1,000,000 in his lifetime. For the next several years, the plantation changed hands and then was designated a National Historic Landmark in 1977. The area was later evolved into a golf course community, with this, the National Historic Landmark title was withdrawn in 2005. The grounds are rumored to be haunted, presumably by some of the slaves that were involved with Franklin's dealings.

Disclaimer: Tennessee Haunted Houses does not endorse or support trespassing to visit real haunts. Before you visit ANY local real haunt, make sure to acquire the appropriate permits and/or permissions, and be respectful of privately owned properties. Countless Haunt Hunters have been arrested, ticketed, and reprimanded by the authorities for trespassing. To avoid this, be sure to get in touch with the property owners before visiting a haunt, and respect their hours of operation, local regulations, and rules for visiting at all times. Happy haunting!
All information on this page was submitted to Tennessee Haunted Houses and was believed to be accurate at the time it was posted. Please report any inaccuracies here.