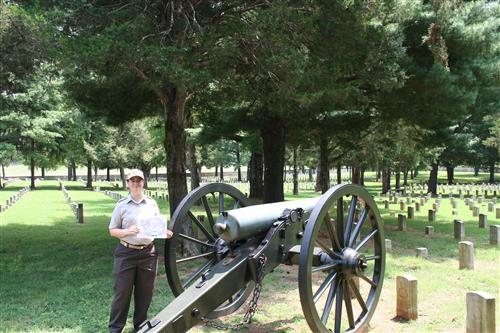 From late December 1862 to January 2, 1863, The Civil War Battle of Stones River was fought. The battlefield includes the Stones River National Cemetery and Stop No. 4, the "Slaughter Pen," where Union General Phil Sheridan tried his hardest to hold back the Confederates in a forest. The battle ended with a high death toll on both sides. Today, the grounds are haunted by a soldier's ghost who pops up around re-enactors' campfires, leaning against a tree or standing in the shadows. One report states that a re-enactor was going for some water in the middle of the night when he witnessed who he thought was an intruder in the bushes. When he called for the man to come out from behind the bushes, it was a soldier in full uniform, his hand raised in surrender. The re-enactor thought it was another re-enactor joking around, so he raised his rifle to the man, who then fell down and vanished into thin air.

Disclaimer: Tennessee Haunted Houses does not endorse or support trespassing to visit real haunts. Before you visit ANY local real haunt, make sure to acquire the appropriate permits and/or permissions, and be respectful of privately owned properties. Countless Haunt Hunters have been arrested, ticketed, and reprimanded by the authorities for trespassing. To avoid this, be sure to get in touch with the property owners before visiting a haunt, and respect their hours of operation, local regulations, and rules for visiting at all times. Happy haunting!
All information on this page was submitted to Tennessee Haunted Houses and was believed to be accurate at the time it was posted. Please report any inaccuracies here.